I wrote this in a few hours to release it during the conference it discusses, so treat its conclusions with the appropriate grain of salt and let me know if you find mistakes.

Google gave me a ticket to their annual developer conference, Google I/O. I am a computer scientist but not really a developer (edit: for the benefit of the person on Hacker News alleging "reverse discrimination" -- I won the ticket in a coding competition. Maybe be a little careful throwing around statements like that. I describe myself as “not a developer” because I’m better at other aspects of computer science, not because I can’t code) so I decided that, rather than bugging people about full stack development or cross-platform coding, I could make myself more useful by analyzing diversity data. By this I mean I spent 6 hours wandering into various conference venues and tapping “F” on my phone when I saw a woman and “M” when I saw a man; in total I counted 916 people. Shoutout to my extremely tolerant housemate Andrew Suciu, who received all these messages:

I focused on gender because I didn’t think I could guess people’s race with high accuracy. (I realize, of course, that inferring gender from appearance also has serious caveats, but the data is useful to collect and I wasn’t going to interrogate random strangers about their gender identity). Here are five things I learned.

Stand back, I’m going to use a metaphor. Imagine King Arthur came back to the castle to find his son cutting pizza with Excalibur.

Arthur: Son, that is literally the magical blade of destiny I pulled from the stone to to become king of England.
Son: Yeah, dad, but it cuts pizza really well.
Arthur: Sure, but can’t you think of anything more exciting to do with it?

This is how I feel about a lot of applications of machine learning, which I’m using here to mean “statistical methods that computers use to do cool things like learn to do complex tasks and understand images / text / speech”. Machine learning is revolutionary technology. You can use it to build apps that will understand “I want curry” and “play Viva la Vida”, but are those really the examples you want to highlight, as the conference keynote did? Let’s talk instead about how we can use machine learning to pick out police encounters before they become violent and stop searching and jailing so many innocent people; let’s talk about catching cancer using a phone’s snapshot of a mole or Parkinson’s using an accelerometer’s tremor or heart disease using a phone-based heart monitor. Those are the technologies that deserve the label “disruptive”, the you’re-a-goddamn-wizard-Harry applications that make your heart freeze. A few moments of the two-hour keynote emphasized big ideas -- the last ten minutes, an app to help Syrians relocate -- but most of the use cases were fixes to first-world problems [3].
Part of this, of course, is that it’s probably more profitable to drone-deliver San Franciscans Perrier than to bring people in Flint any water at all. But part of it is that people’s backgrounds influence what they choose to create. A woman would’ve been less likely to create this app which lets you stalk a random stranger, and someone who’d suffered from racism or classism would’ve been less likely to create this app which lets you identify “sketchy” areas. Machine learning is revolutionary technology, but if you want to use it to create revolutionary products, you need people who want revolution -- people who regularly suffer from deeper shortcomings in the status quo than waiting 15 minutes for curry [4].

Notes:
[1] I’m not that worried about double-counting because there were 7,000 people at the conference.
[2] Call each MMMFMFMFMF... vector corresponding to a line at an event Li. Then I use the following bootstrapping procedure: compute a clustering statistic which I’ll describe below, randomly permute each Li separately, recompute the clustering statistic, repeat a few hundred times and compare the true clustering statistic to the random clustering statistics. (I permute each Li separately because if you mix them all together, you’ll be confounded by event gender differences). I tried two clustering statistics: first, the number of F’s who were followed by an F, and second, the bucket statistic, which is defined as bucket(Li, n, k): the number of bins of size n within Li  that contain at least k women, with k chosen to be at least half of n. I used the second statistic because I thought I might automatically group women together when there was ambiguity in the order of the line (people standing side by side) which I was worried would bias into the first statistic since it’s very local. For both statistics, the true clustering statistic was higher than the average random clustering statistic (regardless of the value of n, k I chose for the second statistic). For the first statistic, this was true for pretty much every random iterate, and for the second statistic, the percentage of random iterates it was true varied for depending on n and k, averaging about 90% of iterates.
[3] This is based only on the keynote, not the rest of the conference. I think this is reasonable because the keynote was watched by millions of people, it was run by the CEO of Google, and a speech like that should reflect what you want to emphasize.
[4] To be clear, I’m not really blaming Google either for the trivial-app problem (although I think their examples could’ve been better chosen, as a company they do a lot of amazing things) or the lack-of-diversity problem; they’re industry-wide symptoms. But that isn’t really reassuring.

Some projects I’ve been working on recently:


Sunset Nerd: a beautiful sunset detector. It’s a robot that monitors the number of posts tagged #sunset on Instagram (a picture sharing website) and sends you a message when there is a beautiful sunset happening in your area so you don’t miss it. If you live in a city -- currently the app works for San Francisco, NYC, Philadelphia, Los Angeles, Palo Alto, Washington DC, Chicago, Houston, San Diego, Miami, Indianapolis, Jacksonville, Boston, and Seattle -- click here to try it out on Facebook -- just send a message! (It will only message you once a week on average, and you can unsubscribe at any time.) For example, Boston on February 5 had a gorgeous pink sunset as a snowstorm cleared, and the detector picked it up; the red line shows the number of posts on that day, and the grey lines show the normal number of posts. 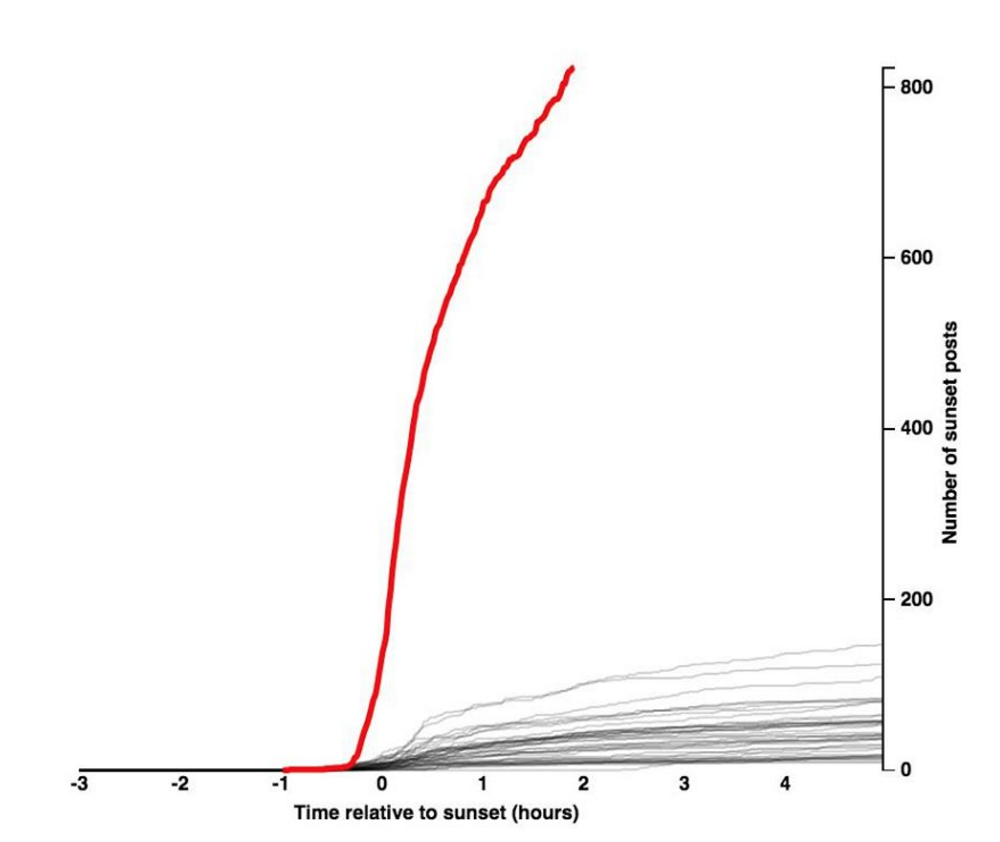 
Computational biology: I’ve gotten to work on two papers, one with Pang Wei Koh and Anshul Kundaje on using convolutional neural networks to denoise epigenetic data, to be presented as a spotlight talk at ICML’s Computational Biology Workshop, and one with Bo Wang, Junjie Zhu, and Serafim Batzoglou on a method for clustering single-cell RNA-seq data, which has been presented at Cold Spring Harbor.


Relationship abuse dataset: if this is a research interest of yours, I have a dataset of more than 100,000 Twitter posts under the hashtags ‪#MaybeHeDoesntHitYou‬ and #MaybeSheDoesntHitYou. Filtering on tweets with form "#MaybeHeDoesntHitYou but" yields a large dataset of people's experiences with non-physical relationship abuse. Shoot me an email (emmap1 “at” cs.stanford.edu) if you have project ideas -- no time to pursue this project on my own, but happy to discuss collaboration.