In Which I Try To Escape Statistics At The Symphony

Lately I've been working on two statistical projects to do with gender and have consequently gotten a little obsessed with gender issues. So I decided to take a break and go to a piano concert -- a pianist who had won the Nobel Prize for piano was playing the most difficult piano piece ever written [1]. Brilliant pianist, beautiful music -- what better way to distract myself from statistics and sexism?

But, haha, joke's on me! I took my seat at the symphony and couldn't help noticing some pronounced gender discrepancies in who played what instrument. I had thrown my program away, so after the concert I went rummaging through the trash in front of a distinguished and disapproving older man -- this is what I'll do for data -- and found a program. For the musicians whose gender I could identify: 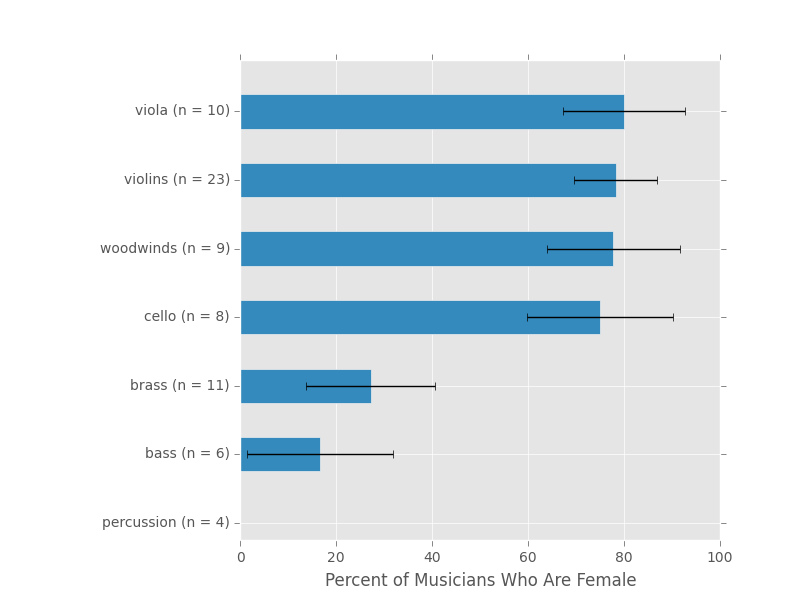 Showing there's a gap between genders is easy; more difficult is, why do we see that gap, and is it a bad thing? In this case, the cause of the gap is somewhat mysterious -- I spent about half a Brahms quartet worrying about it -- because it seems like love of classical music is a pretty deep thing, and to be a professional musician you have to choose your instrument when you're quite young, and we might not expect to see gender discrepancies in which funny looking device you use to express yourself. People often make one of two premature and opposite assumptions when they see a gender gap:

a) The gap isn't bad: it must be due to inherent differences in aptitude or interest. For some instruments, I can think of plausible gender differences in aptitude -- maybe it helps to be tall to play the bass? Maybe having bigger lungs makes it easier to play brass instruments? -- but it's harder to come up with things for the violin. If you want to argue that boys really have an inherent dislike or lack of aptitude for violin, you're going to need to show me the study where you played little babies concerti and counted how often they cooed. Or something.
b) The gap is bad: it must be due to EVIL PATRIARCHAL FORCES. You mad, bro? Yes, we can think of plausible insidious explanations, mostly related to how "manly" an instrument seems. But, again, I want to read the study where boys' parents wouldn't let them play flutes cuz they didn't want them to be sissies, or read the interviews with the former female bass players who got tired of being teased about the massive pieces of wood between their legs.

So I don't think we should assume that gender gaps are or aren't bad. What is inarguable, however, is that the gaps exist and that you can't escape them, even at the symphony. There's an excellent commencement speech entitled "This Is Water", so named for the following anecdote:

The point being, as the author explains, "that the most obvious, important realities are often the ones that are hardest to see". I think the water metaphor works well for the forces which produce gender discrepancies [3]. We're submerged in this unescapable, ubiquitous sea, and we can't be sure if we're heading where we're heading because we want to or because we've been caught by some little eddy -- did you treat her argument with skepticism because her voice was pitched too high? --  or some huge current -- did she go to science grad school because the American government encouraged many women to in the 1950s? And because these currents always guide us and sometimes drown us, it's worth being mindful of them -- this is water -- and trying to break the surface and take a breath once and a while [4].

This is water to me is a more palatable version of check your privilege, a phrase which has been in vogue of late. The problem with check your privilege, besides the fact that it atom-bombs a debate ("Oh, okay, privilege checked! Now, as I was saying...") is that it isn't just the ones on top who should think about the invisible forces that have gotten them there, but everyone. Yes, the white male should probably keep in mind that our society allows him to be more assertive than most -- but shouldn't the minority female also keep her assertiveness disadvantage in mind when she's negotiating for a raise? Check your privilege should really be check the invisible currents, good and bad, that have carried you here -- this seems to me both more complete and less hostile, although it's harder to Tweet.

I realize I'm a statistician, not a gender theorist, so feel free to send me angry messages. The concert, incidentally, was so good that I briefly forgot all about statistics and just cried; I'm a wimp. Probably it's a girl thing.

If you want to hear the piece played in the concert, here are four options:

Notes:
[1] Arguably. Rachmaninoff's 3rd Piano Concerto has some amazing stories linked to it: one guy went crazy trying to play it, and another guy won a huge international competition held in Russia playing it -- even though he was an American playing Russian music in Russia at the height of the Cold War. The judges were so scared to award him first prize that they asked Krushchev for permission, and Krushchev said, "Is he the best? Then give him first prize!"
[2] You might ask: well, how dyou know this isn't just specific to San Jose? I took a look at my hometown (Washington DC)'s orchestra and the Chicago orchestra for comparison, and it looks like  the basic patterns endure -- in Washington, all of the bassists are male and 63% of the violists and violinists are female; in Chicago, 65% of the violists and violinists are female and all 9 bassists are male. I'd love it if someone would do a more systematic review, because it does seem possible to me that San Jose is quite different from larger cities -- in particular, we might see fewer women as the level of the orchestra increases, in the same way that we see few great women chefs even though cooking is a stereotypically female activity. Ping me and we'll write a follow-up post.
[3] Though the original commencement speech makes a very different point.
[4]  This is not, of course, unique to gender issues; for example, I could pick out almost all the symphony-goers off the street because, in contrast to the average San Jose resident, they were old, white, and wearing fancy clothing.

Mothers, be Good to Your Daughters

In honor of Mother's Day, at 23andMe we took a look at how our traits correlate with our parents' using 15,000 father-mother-child trios; full post here. We found, of course, that the child's trait tends to be highly correlated with both parents' [1]. Somewhat remarkably, we found no cases (among hundreds of traits) where children show statistically significant tendencies to be different from their parents. The more interesting part, though, is that this effect is stronger for mothers: if you compare the strength of the correlation between the father and the child to the strength of correlation between the mother and the child, the mother's correlation is stronger for most traits. And when we break this down further by the sex of the child, we find it's primarily due to daughters: sons are more influenced by each parent for roughly equal numbers of traits, but daughters favor their mothers. To showcase the quirky ways in which we take after our mothers, 23andMe's designers made this beautiful infographic:

Previous research has found that daughters often do take after their mothers -- in BMI, for example, which might in turn be due to maternal influence on diet -- but the reasons for this are probably very complicated. Some of it could be due to the different genetic material we inherit from each parent -- mothers, for example, give us mitochondrial DNA -- but some of it could also be due to the different roles parents play in our lives: mothers spend more time with children, for example.

Happy early Mother's Day to my mom, a force of nature who I'm proud to feel similar to: I don't need statistics to know she's done as much as anyone to get me where I am today.