Love in the Time of Ebola

There’s been no shortage of frightening headlines about Ebola. (Don’t actually read all those headlines -- they’ll depress you -- just feel grateful that I read them for you.) One might expect this fear, like a more contagious version of Ebola itself, to infect the general public. Fear can cause more damage than the original disease: see Contagion, V for Vendetta, or (if you want a non-fictional example) this World Bank estimate. So I ran a survey to try to find out just how scared Americans are of Ebola. The results were disheartening, but not for the reason I expected: Americans aren’t that scared of Ebola, but only because they don’t much care about West Africa.

79% of people said they worried about getting Ebola once a week or less. They worried less about dying from Ebola than dying from the flu, a car crash, a plane crash, or a terrorist attack. The only thing they said they worried about less than Ebola was dying in a meteorite strike -- a fate which the Economist estimates has a 1 in 75 million chance of occurring. (I’m pretty skeptical of that number, but whatever.) Other surveys have also found that Americans aren’t that worried about getting Ebola: for example, the Pew Research Center found that just 11% were very worried they would be exposed to the virus.

People did display some irrationalities. For example, roughly a quarter worried more about dying from Ebola than from car crashes or the flu, even though these kill tens of thousands of Americans a year. But when I asked people to estimate how many people Ebola would kill in the United States, almost no one estimated anywhere near this number. Assuming the only reason to worry about Ebola is that it kills people, these people were giving inconsistent answers within the space of a single page.


I asked people to estimate how many people would die from Ebola both in the United States and worldwide. There was a significant correlation between both these variables and how much people said they worried about Ebola, but the correlation with worldwide deaths disappeared when I controlled for United States deaths. In other words, how many people die abroad doesn’t matter to an American’s level of worry if you account for how many people will die in America. Important addendum: Bob Aldrich points out that this may be because the wording in the survey emphasizes how much people are worried about their own safety, in which case it makes sense that we wouldn't see much correlation with faraway deaths after controlling for nearby ones. I suspect you would see similar results if you reran the survey with wording which did not emphasize personal safety, because several other findings point in the same direction. For one thing, almost everyone knew the number of US patients who had died, but less than half could identify the number of patients who had died worldwide [1]. Worse, at the end of the survey, I offered people the chance to forfeit their payment for taking the survey: in exchange, I would donate five times the payment to Doctors Without Borders, an international humanitarian aid organization which fights Ebola. People received just nine cents for taking the survey, yet two thirds of them refused to give up their payment. It’s possible they didn’t believe I would actually pay [2] or that they worried that not getting paid would damage their reputation on Mechanical Turk (I assured them it wouldn’t), but is either one of these motivations (or less than a dime in payment) enough to deny help to an Ebola patient?

Some important caveats to these results. First, the numbers on how worried people are will almost certainly change as the situation evolves and coverage continues. For example, the number of Americans who consider Ebola a “major threat” to the United States has doubled in recent weeks. (I conducted the survey prior to the announcement of a second patient in Dallas, so things may already have changed.) Also, how worried people appear to be depends a lot on how you ask the question; for example, seven in ten Americans report being at least somewhat concerned about an Ebola outbreak. It’s also possible that people are understating how worried they are because they don’t want to look silly. Finally, I conducted the survey using Mechanical Turk, a website commonly used for research in psychology, economics, and political science; Mechanical Turk has its own idiosyncrasies which I describe here [3], and in particular might lead to underestimates of how worried people are.

But my results mirror the indifference to faraway deaths that we’ve seen in the broader response to Ebola. For example, Google searches for “Ebola” peak only when the virus threatens the United States: once after the first two Americans were brought back to the United States for treatment, and once after Thomas E. Duncan flew back to Dallas with Ebola. Tweets about Ebola show a similar pattern. Or consider the plunge in airline stock prices after news of Duncan’s illness broke on September 30th: 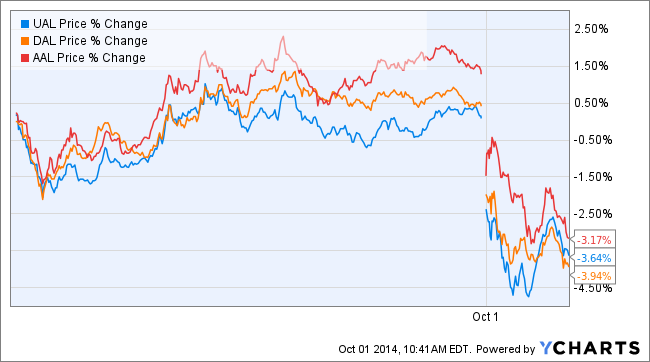 That’s a movement of more than 2 billion dollars -- far more than has been pledged to fight the entire Ebola epidemic. When it comes to moving money, evidently, “US airline valuations” is a more potent force than “saving West African lives”.

People’s lack of fear is heartening, but our lack of compassion isn’t. The media would do well if, rather than trying to frighten us with the small mistakes made by American hospitals, it focused on the people who often cannot reach a hospital at all. More broadly, I’ve been getting increasingly worried about our ability to ignore the suffering of people who are a) unseen b) far away c) different from us, because it seems like a cognitive bias that plausibly costs millions of lives -- because it allows us to a) not get terribly upset about foreign policies that kill lots of people b) not donate as much to charity as we would if we actually felt other people’s suffering the way we feel a nice warm cup of coffee c) donate to charities that seem close and tangible rather than ones that actually do the most good. I could go on about this but truthfully I’m a bit of a hypocrite because the reason I conducted this survey in the first place is because I had a nightmare about getting Ebola; these are by no means biases that I am myself immune to. So I’ll close with just two notes:


[1] Not the exact number; they just had to say "Between 1,000 and 5,000".
[2] I actually got so annoyed with my survey takers that I just donated regardless of what they said their preference was.
[3] Previous studies of Mechanical Turk have concluded that it yields data that agrees with other sources [1, 2, 3], offering less biased results than, for example, the “convenience samples” of college students that have historically been used in research. But most samples are biased in some way, and Mechanical Turk workers do tend to be younger, poorer, better educated, and more liberal than the general population. This may explain why my survey-takers appeared especially unconcerned about Ebola: previous polls have found that Americans who are more liberal and more educated are less likely to worry about the virus. Please keep these caveats in mind in interpreting my results (although if you happen to have the resources to run a survey on a less skewed population, we statisticians are always looking for survey daddies).