For non-Americans: the State of the Union is an annual address in which the president outlines how the country’s doing and the agenda for the future.

Which parts of Obama’s address particularly resonated with the public? One can judge the congressional response to each line by listening to applause in the chamber, but it's harder to know what the country as a whole thought. One way to find out is to look up every single sentence in the speech on Twitter and study each response. Yes, this took a while, and yes, I should probably find other hobbies, but the results were worth it.

Each point in the graph below represents a single sentence, ordered from left to right by order in the speech; the height of the point represents how many people retweeted it. 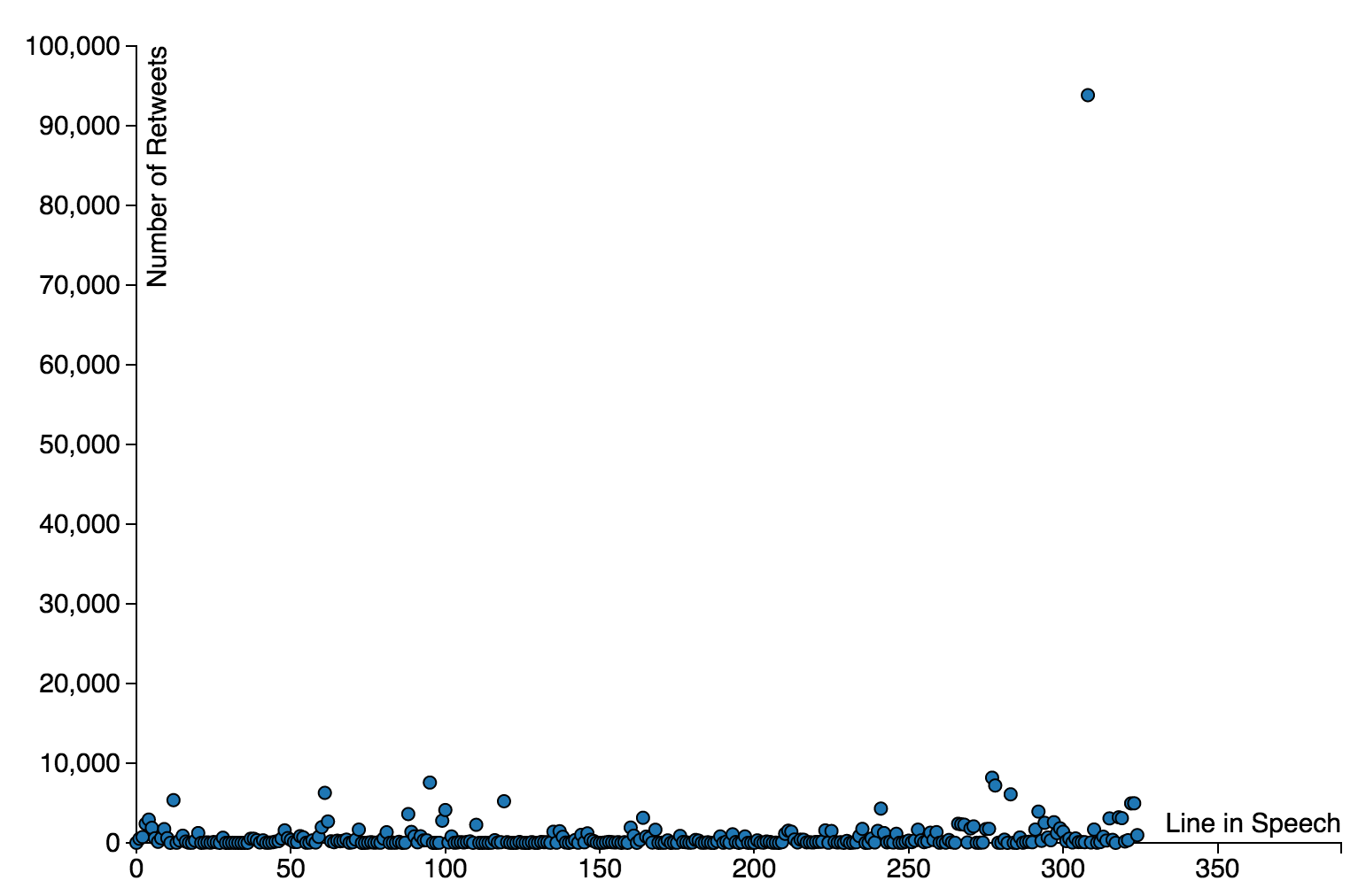 What is that point in the upper-right corner, the quote that is shared 10 times as widely as any other line in the speech? Surely it must be some rhetorical masterstroke, a particularly inspired policy proposal? No: it's the ad-libbed moment in the speech where Obama puts down the Republicans. 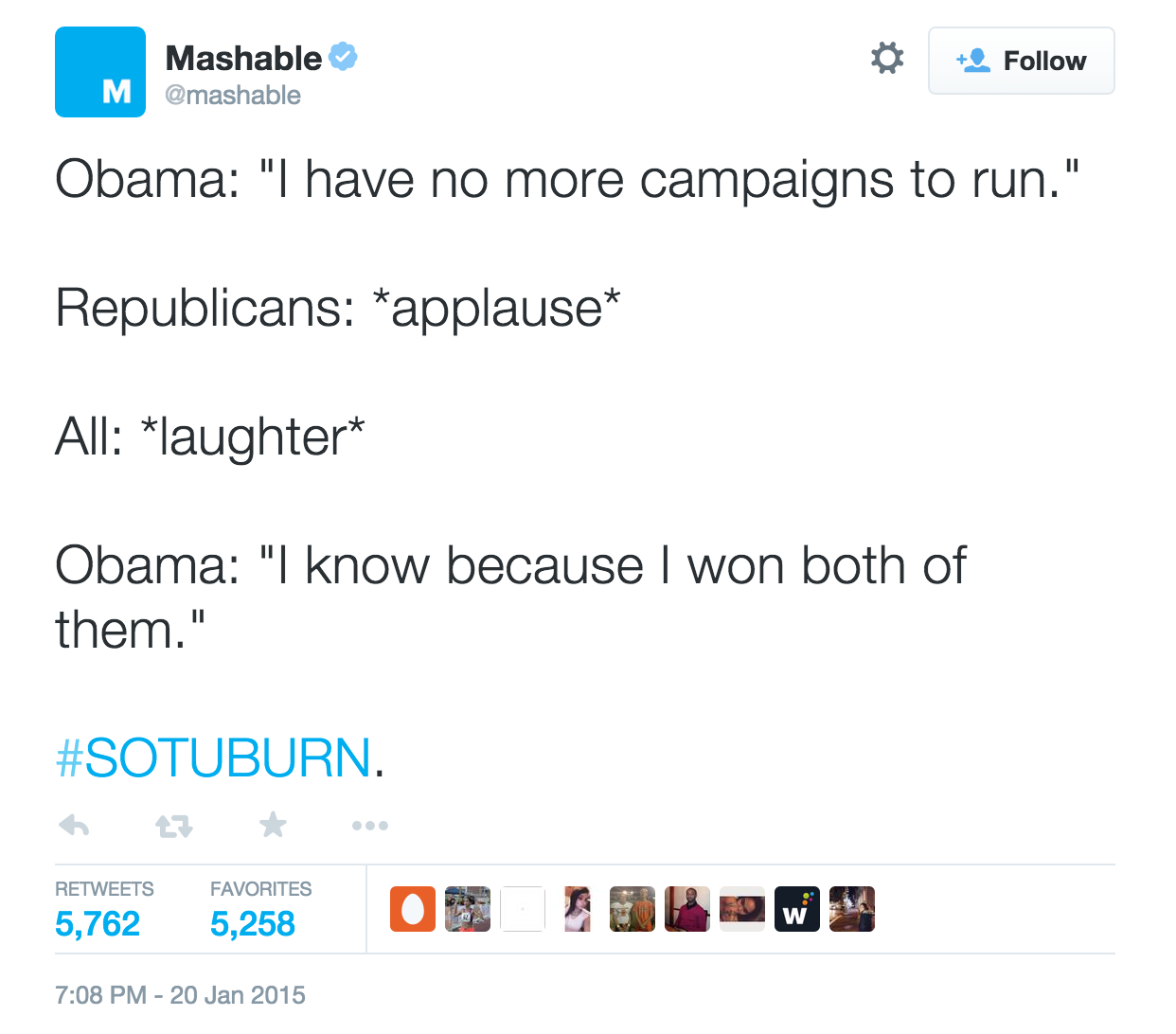 We criticize our politicians for lack of civility, but how do we expect them to behave when we pay more attention to their snappy retorts than their policy proposals?

Zooming in on the graph (click here and mouse over points to see which quotes they represent) we see that many of the most widely shared lines reprise the messages of hope and unity that so resonated when Obama originally took office: "I still believe we are one people", "I still believe that together, we can do great things", and "Let's begin this new chapter -- together -- and let's start the work right now". (More substantive lines, like those about gay marriage, community college, middle-class economics, and climate change, were also shared widely).

The only problem with these pleas for unity? For the most part, only the Democrats found them compelling. Self-identified liberal tweeters outnumbered self-identified conservative tweeters more than two to one for every single one of the top 25 most retweeted lines in the speech. Among those sharing "My fellow Americans, we too are a strong, tight-knit family", I could identify 96 liberal tweeters and only 5 conservative tweeters [1]: perhaps not such a tight-knit family after all.

So what lines were shared among Republicans? Here are the lines whose retweeters skewed most conservative (among lines shared by at least five tweeters with identified political affiliation).

Of course, political party isn't the only characteristic that affects how we react to a speech. Men and women [2] reacted in different ways as well.

After I completed this analysis, I could see why Obama’s speechwriter needs a stiff drink. He had to please a thousand different constituencies in a single speech, half the country wasn’t going to be happy no matter what he said, and the line that people liked best wasn’t even in his draft. I’ll stick to writing code.

Notes:
[1] Most tweeters do not identify their political affiliation in their profile, so this approach works only for a small subset of tweeters.
[2] I used the name of the tweeter to identify their gender. This does not work for all tweeters, and it does not account for people whose gender does not fit a binary description or does not match that implied by their name, but I still think it’s worth doing on balance because it gives a useful (if noisy) signal.

The Atlantic’s Quartz just published an analysis I worked on with Gilad Lotan [1] about how people discuss race on Twitter using the hashtags #CrimingWhileWhite and #AliveWhileBlack. You should read the piece (cmon -- I was writing this over Christmas) but in brief, the results are more hopeful than my earlier, depressing analysis of how people discussed Ferguson. When studying Ferguson, I found that different social groups expressed opposite views, rarely talked, and were often hostile when they did; studying #CrimingWhileWhite/#AliveWhileBlack revealed that while different social groups expressed different views, they weren’t opposite views, and information sometimes spread between groups in a constructive way.

Good signs! Unfortunately, this apparent improvement may be somewhat illusory. In the Ferguson discussion, conservatives and liberals often clashed; in the #CrimingWhileWhite and #AliveWhileBlack discussion, conservatives appear to have mostly disappeared. So it’s not that people all agree; it’s that those who disagree are silent. It’s not that the schisms that scar Twitter have healed; we’ve just zoomed in on part of the landscape.

Here’s another example of this. On December 28, Leelah Alcorn, a teenager who was born Josh Alcorn but identified as female, committed suicide and posted a note blaming her parents’ intolerance. The story spread rapidly on Twitter, where people overwhelmingly supported Leelah and blamed her parents. One of the clearest ways to see this is in the gender people used when referring to Leelah: while her mother used male pronouns, Leelah used female pronouns. Tweeters were hundreds of times more likely to use “Leelah” than “Josh”, and pronouns also show a dramatic skew. In the graph below, the green line shows the proportion of tweets that use “Josh”; the blue line shows the proportion of tweets that use “Leelah” [2]. 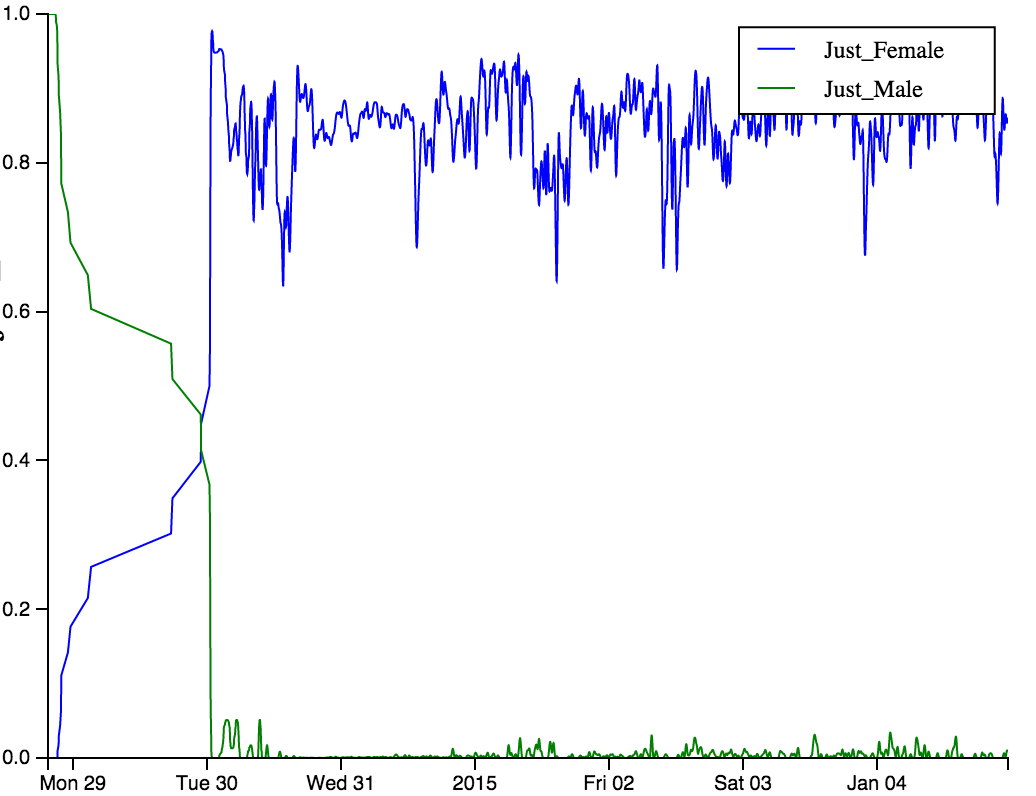 The green spike at the beginning is due to local tweeters who were offering condolences before the suicide note had been published. Their use of “Josh” implies that Leelah’s preferred identity was not widely known (or, perhaps, ignored) among those who knew her. (One tweeter who used male pronouns defended himself by saying, “She went to my school but I didn’t know she was trans”).

It would, of course, be wrong to conclude from this that there is overwhelming acceptance of transgender Americans. A survey of LGBT Americans found that just 3% believed there was a lot of acceptance of transgender adults. Two explanations seem more plausible: the people who would refer to Leelah with male pronouns either aren’t on Twitter, or aren’t choosing to comment in the aftermath of her suicide.

As I write in the Quartz piece, we need more than this illusory uniformity; we need fierce but productive dissent. The internet tantalizes us with its ability to create a single human overmind, but at the moment that mind’s had its corpus callosum severed. Please write to me if you have thoughts on


[1] A Twitter expert. He does professionally what I only dabble in, and has studied everything from ISIS to Israel.
Posted by Emma Pierson at 6:59 AM 4 comments: