Arguments I’ve had with Shengwu Li, part 1: should you vote?

This piece comes from conversations with my housemate, Shengwu, who is leaving us for Harvard. We are all sad about this; I am sad about it in part because Sheng has sharpened my thinking as much as anyone I know. I still remember the first time we talked about math; sitting at a coffee shop I thought, shit, this guy with the Oxbridge accent and the penchant for Latin phrases might actually be as smart as he sounds. You won’t find someone who’s more fluent talking about both math and morality, and you won’t get a better intellectual guarantee than “this argument is Shengwu-proof” . I’m not really sure what we’ll do without him -- less rigorous social science, I guess. Any errors in this analysis remain my own.

Here are two questions we’ve been arguing about recently.

I’m going to talk about the first argument in this post and the second argument in a later post because I’ve been informed that there’s a limit to how much other people want to listen to Sheng and I argue.

There are many arguments for voting -- “what would happen if no one did?” “people died for your right to vote!” -- but let’s consider a crazy one: you should vote because you might be the tie-breaking vote in an election. Obviously, this is incredibly unlikely. On the other hand, if you did, it would be incredibly important. So just how unlikely is it?

Say you live in a state with a million expected voters where one candidate is polling at 52% and the other at 48%. Here’s a first attempt at figuring out how likely you are to be the tying vote: if each voter is like a coin with a 52% chance of landing heads, what is the probability you get exactly 50% heads? The answer is so small -- less than one in 10100 -- that the computer returns 0. If you run a bunch of simulations of the fraction of heads, it looks like this -- pretty much every time you’ll end up with a fraction close to .52. 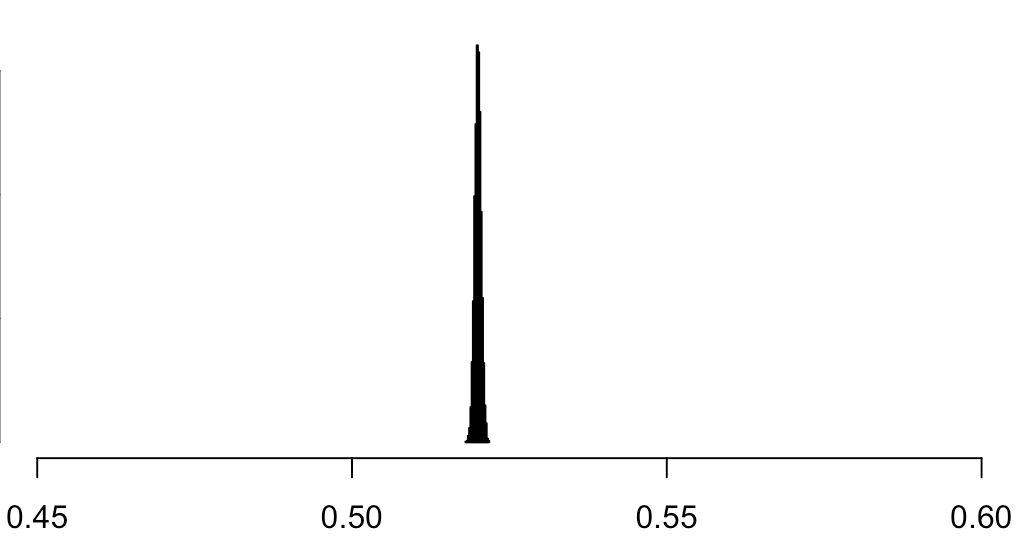 This implies that voting is a waste of time; you have no chance of influencing the outcome. But this simple analysis turns out to be wrong for a simple reason: polls aren’t perfect. Just because a poll tells you 52% of voters prefer a candidate doesn’t mean that 52% of voters actually do. One source of error is the margin of error in polls: as the Upshot pointed out recently, because pollsters only sample a relatively small group of people, polling results fluctuate just due to random noise. So if a poll tells you that 52% of voters prefer a candidate, the real percentage might be something like: 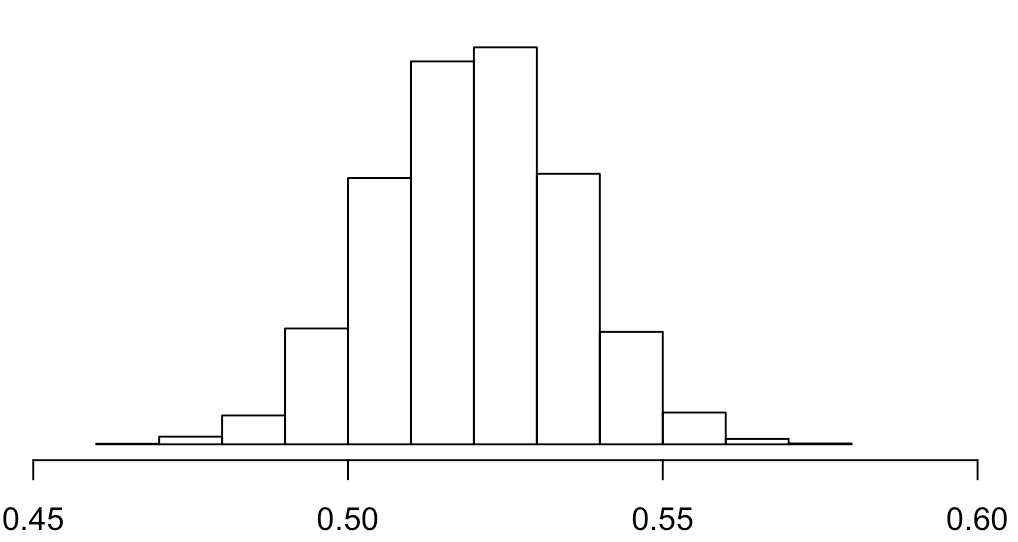 Which is a lot more uncertainty than we saw before.

Given this uncertainty, it turns out the chance that you're the tying vote is not that low -- somewhere between 1 in 100,000 and 1 in 10 million (see [1] if you want modeling details). Which sounds low but is actually astonishingly high. If the difference in value between the two candidates is, say, a trillion dollars -- which is plausible, given the size of the US budget and the very different uses Trump and Clinton would put it to -- then a 1 in 10 million chance of influencing the election outcome means that in expectation, you change the allocation of $100,000. Of course, I’ve only simulated a single state, not the whole election, using a very simple model. But after doing this I discovered a more sophisticated analysis from Andrew Gelman, Nate Silver, and Aaron Edlin which reached a similar conclusion: if you live in a state which is at all close, voting is probably worth your while simply because of the possibility you will be the tie-breaking vote in an election. If you are trying to decide whether your state is at all close, err on the side of “yes”; here are 538's predictions for every state.


This was surprising to both of us; I am definitely going to vote now (in Virginia, a swing state), and you should too!

Addendum: a corollary to this is that you should not vote for a third party candidate on the grounds that "my vote will never matter anyway, so I'll just vote my conscience". Vote for a third party candidate if you want to, but if your state is at all close -- and current polls imply that many states will be -- weigh your desire to vote your conscience against the fact that, mathematically, your vote really could affect the outcome of the election.


[1] Very simple model: draw the true fraction of voters ut preferring a candidate from a normal, ut  ~ N(up, sigma), where up is the fraction preferring a candidate according to polls and sigma is the uncertainty on the polls (due not just to margin of error but to other things as well); then draw the number of voters voting for a candidate, V, from a binomial distribution, V ~ binom(T, ut), where T is the total number of voters. What is the probability that V = T / 2?
Posted by Emma Pierson at 1:23 PM 13 comments: